ARE THERE DINOSAURS ALIVE IN AFRICA TODAY ? 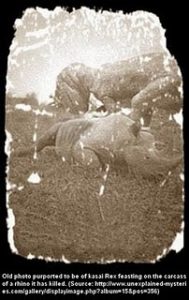 THERE ARE MANY WHO HAS SEEN THEM – LIKE THIS ONE – –

In 1932, Swedish plantation owner John Johnson (sometimes spelled Johanson) was traveling with a servant in the Kasai Valley. They encountered a rhinoceros and tried to avoid detection when a large creature rushed from the undergrowth and attacked the rhino. Johnson fainted and the servant ran away. When Johnson recovered, he saw the creature eating the rhino.

“It was reddish in color, with blackish-colored stripes,” he said later. “It had a long snout and numerous teeth.” He decided that the creature, 13 m (43 ft) long, was a Tyrannosaurus, and also said “The legs were thick; it reminded me of a lion, built for speed”.

However, no tyrannosaurids were known to live in Africa, but one theropod similar to the size report and lived in Africa is none other than the Carcharodontosaurus saharicus. Carcharodontosaurus was the apex predator of Early Cretaceous Africa, and was also known to compete over food with Spinosaurus aegyptiacus.

Spinosaurus Aegyptiacus was a 35 to 55 foot long carnivore from Egypt and Morocco. It ate fish like Lepidotes and Onchopristis. No full or nearly complete skeleton has been discovered.

Carcharodontosaurus Saharicus was a 30 to 45 foot long carnivore from northern Africa as well as some parts of South Africa. This theropod was a ruthless cannibal that killed and ate others including its own mate!

Both creatures lived in swampy places around 70 million years ago. They would have eaten Paralititan, Ouranosaurus, Aegyptosaurus, and if needed the scavenging abelisaur Rugops.

Read more on it at:  http://cryptidz.wikia.com/wiki/Kasai_Rex