AND HERE THE ALIENS ARE every week ! 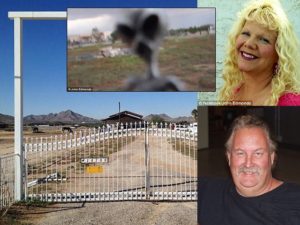 Straaaaaaange !!
BUY YOURSELF A PLACE where you will ( not may ) see Aliens all the time. John and Joyce Edmonds in Buckeye Arizona has Alien “pests” visiting their ranch all the time. They take pictures of them, and they have artifacts. Many of the neighbors and other people have seen what is going on. In fact, John killed one of the Aliens one time (maybe that is why the Aliens are harassing them). It is straaaaange.

“THE ALIEN RANCH” is for sale. John and Joyce Edmonds see Aliens on their ranch, and take pictures of Aliens on their ranch all the time. The owners of the ranch thinks there is a “portal” somewhere on the ranch, and there may be an Inter Dimensional connection. Anyway, they are selling the ranch. The Aliens are not just “pests” any more, it is bordering on harrazzment.
Here is what www.butterflylanguage.com say about it:
After 20 years, John and Joyce Edmonds have finally put up their Stardust Ranch—also known as “Alien Ranch”—for sale. They claim they have had enough of the “evil extra-terrestrials from another dimension” that have been attacking them; molesting Joyce, and even prompting John to kill 18 of the creatures using his samurai sword.

The couple, who have appeared Ghost Adventures on the Travel Channel, are asking for $5 million for the 9.67 acre Arizona property. And considering they apparently believe that the land is a portal to another universe through which the aliens come into our world…that might not be such a bad price.

John Edmonds, who has posted regular updates on Facebook concerning him and his wife’s fight with the aliens, says that the creatures “pop up” at random, sometimes singly and sometimes in groups. It had gotten to the point that he had to slay a number of them with his samurai sword—though he claims the alien bodies vanish after he kills them, he has posted the aftermath of the alleged attacks, which include what looks like copious amounts of dried blood:
My personal take…somewhere between that there is something electromagnetically or even radiation-wise “weird” about that area (which would produce odd effects on reality and even something that would seem like an extradimensional situation) and a possible hoax.

I tend not to believe many of these sightings and experiences are literally caused by aliens who have arrived on Earth in a physical spaceship from other planets—and to me, the “tell” is the sightings of the greys. It’s not that I don’t think it’s possible that life on other planets could reach Earth or have done so in the past. But I think these “grey aliens” are something really really (really) weirder than that, almost placing them more along the lines of poltergeist activity.

But some scientists could take this ranch off John and Joyce’s hands and figure this situation out.