CRYPTO CURRNCY AND WHAT YOU NEED TO KNOW. 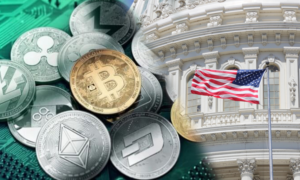 IF YOU ARE NOT HOLDING CRYPTO CURRENCIES, YOU NEED TO START.  HAVING A LITTLE OF AN IDEA OF WHAT IS IN OUR FUTURE,  I SUGGEST YOU START READING ABOUT IT.  LARGE GLOBAL BANKS ARE HOARDING IT – TRADE PLATFORMS ARE HOARDING IT – GOVERNMENTS ARE HOARDING IT, AND THEY ALL TELL YOU IT WILL COLLAPSE AND IS TOO VOLATILE.  FOR THE SHORT TERM INVESTOR, IT CAN BE, BUT FOR THE FORESIGHTED LONG TERM THINKING ONES – THIS IS WHERE THE FUTURE AND WEALTH IS.  START RESEARCHING BITCOIN – DASH COIN – LITE COIN, THEY SHOULD BE THE BIG ONES.  ALSO RESEARCH:  ETHERIUM – ETF FOR BASKET OF CRYPTOS – RSK ON BITCOIN.  THE PRICE OF A BITCOIN TODAY IS $ 7,754.67.  MY PREDICTION IS IT WILL BE $30,000 BY THE END OF THE YEAR.  MANY OTHER CURRENCIES WILL DO THE SAME.  SPECIALLY CONCENTRATE ON DASH – LITE COIN – AND BIT COIN.

Will cyrptocurrencies disrupt central banking? US Congress meets to discuss

The buzz about cryptocurrencies seems to be as volatile as cryptocurrencies themselves, there is always a ‘war for our perception’ when it comes to something so threatening to the current financial system, and the way we’ve been doing things for years with regards to finance. Everybody from billionaires like tech investor Tim Draper, to ex-Facebook executive Chamath Palipitaya, to entertainers like Akon and more, have all urged the masses to look into Bitcoin, the current dominant cryptocurrency.

What makes cryptocurrencies so popular is not their potential to make a lot of money, but, from a financial perspective, it’s simply another option from “autocratic regimes and baking infrastructure that we know is corrosive to how the world needs to work properly.” Said Palipitaya about cryptocurrency a couple of years ago. “You cannot have Central Banks infinitely printing currency, you cannot have folks with misguided and misdirected monetary and fiscal policy…It’s a con game.”

Anything that can disrupt modern day banking is huge, given that this is the control hub of the Deep State and the ‘Cabal’ that seems to have its tentacles spread over all aspects of humanity, preventing solutions from being implemented quicker. Christine Lagarde, head of the International Monetary Fund has even cautioned that cryptocurrencies could displace central banks and conventional banking in the long term.

Clearly a good thing for us, but not the financial elite who continue to benefit from a system that only serves a select few.

Cryptocurrencies can change this.

Whether you know much about cryptocurrencies, and Bitcoin or not, know that it threatens something so central, and something that has been holding humanity back in many ways for a long time. Banking.

Any disruption to our current banking system is a great leap forward, in any form, but ultimately, any type of currency with any type of value is not really needed here on planet Earth. But that’s a transition to take place over a period of multiple years if we choose to head the right direction as a collective.

This is why it would not be a surprise to see some big-time restrictions and regulation put on cryptocurrencies, like Bitcoin, in the United States and other parts of the world. There already has been, but at this point, Bitcoin doesn’t really seem like it can be stopped and looks like something that has a bright future, according to many. That being said, a lot of mainstream media and some big-time popular financial figures have constantly bashed and criticized it.

“Bitcoin is money outside of government, controlled by the people who become their own sovereignty. Bitcoin will do the nation-state what the printing press did to the church…The use-case as stateless money drives adoption because it’s universally appealing and fills a void every human being feels in their soul: to be free.”  – Max Kieser (source)

The thing is, can the government really do anything about cryptocurrency? The story goes that it was created without their permission, it went past the gatekeepers, are they really needed anymore? Is cryptocurrency beyond their reach? Do they have no choice but to perhaps join in and participate somehow?

Important questions… While some feel there can be a backdoor into some popular cryptocurrencies, it’s important to note that either way, people are beginning to learn about central banking and how enslaving the current system truly is.

Could It Be Used Worldwide Soon?

Right now, witnesses are testifying at a House Financiancial Services subcommittee on whether the government should consider cryptocurrencies as money and their uses.

Rodney Garratt, a professor of economics at the University of California, Santa Barbara, claimed that the banks have to decide whether they want “to withdraw completely from providing a payment device for the general public,” or whether they prefer to adopt a digital alternative. Which, in turn, could be “some form of crypto.”

This seems to suggest some are pushing for the mainstream world to create a competitor to Bitcoin? If they wanted to make a cryptocurrency popular, the ‘gatekeepers’ and the Deep State no doubt could.

An article written for Cointelegraph explains:

Alex Pollock, senior fellow at the R Street Institute, argued that “to have a central bank digital currency is one of the worst financial ideas of recent times, but still it’s quite conceivable…” Pollock said that central bank digital currencies would only increase the size, role, and power of the bank, adding that the Federal Reserve adopting a CBDC would result in it become the “overwhelming credit allocator of the U.S. economic and financial system.”

The hearing includes a lot of people, not just academics, but engineers, entrepreneurs and more from the industry, one that seems to be growing rapidly with more adoption of cryptocurrencies.

Again, this is great that the financial world is being shaken up, and there is a big discussion to be had, but nothing can justify what we have today remains the same. Things are changing, and as always, heavy criticism and harsh resistance follow.

The Need For A Use Case

You hear a lot about new coins popping up, with ICO’s that reach within the millions. People buy in banking on the rise of the coin based on emotion alone. But what use does the new coin truly have? Or simply, is the coin tied to service, value or commodity of sorts that may suggest a greater value than simply emotion?

For example, Bitcoin is an old outdated version of cryptocurrencies already. What?! Yes. It’s payment processing times are slow, making it very difficult to be used as a means for everyday payment. It’s blockchain simply can’t scale to manage this sort of task. It also does not have any use case or service tied to it that makes it useful beyond being held as an investment. In other words, the only thing holding up Bitcoin’s value is emotion.

Whereas, if you look at a new crypto and new blockchain called TimiCoin (also TimiHealth and TimiDNA), you would find that not only is their blockchain robust enough to service many transactions at a time, but there is a powerful ‘use-case’ tied to the token that creates a ton of value. The use-case is simple: the Timi ecosystem allows people to access their health records instantly – and monetize their own data! This, instead of having corporations keep hold of your records, and having them sold to third parties to be monetized, where you get nothing, with your records, your data, you should be able to monetize it.

Timicoin is a cryptocurrency for the people. It allows them to take power back from corporations on something important and gives you the power to monetize.

Cryptocurrency, in general, has the potential to empower the people by keeping control out of the hands of government and corporations.

We recognize there have been doubts, and that crypto is simply part of an ‘elite‘ plan, but ultimately, we need a change in how we deal in currency, and this has the makings of it. There are both positive and negative tones coming out of this hearing, and that’s to be expected.

This article above is a re-print from www.nexusnewsfeed.com