IT IS HAPPENING: FOUR STRAND DNA HAS BEEN DISCOVERED

AND THE FOUR STRAND HELIX IS ONLY A STEP ON THE WAY TO FURTHER DEVELOPMENT.  SCIENCE DOES NOT LIE ON THIS.  WITH THE EXTRA ASSEMBLY OF “JUNK DNA” INTO A STRUCTURE OF A MORE COMPLEX HELIX, IT GIVES THE PERSON NEW POSSIBILITIES AND ABILITIES TO DEVELOP…… IT IS HAPPENING.  WE ARE ON OUR WAY:.  CLICK BELOW AND READ THE SCIENCE AND THE REST OF THE STORY: 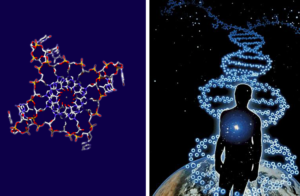 In his book published in 1982, Life Itself, he argues that there is no possible way that the DNA molecule could have gotten its start here on Earth and that it had to have come here from somewhere else. Within the mainstream scientific community, the generally accepted theory is that we are the result of a bunch of molecules accidentally bumping into each other, creating life. However, according to Francis, we are the result of what is now known as Directed Panspermia. Crick and British chemist, Leslie Orgel, published their paper on it in July of 1973.

Their theory explains that, “organisms were deliberately transmitted to Earth by intelligent beings on another planet. We conclude that it is possible that life reached the Earth in this way, but that the scientific evidence is inadequate at the present time to say anything about the probability. We draw attention to the kinds of evidence that might throw additional light on the topic.”  (source)

You can read more about that here.

I thought this was important to mention, because we don’t really know much about our DNA, and it’s extremely mysterious, despite the fact that some scientists believe we know most of what there is to know. We probably haven’t even scratched the surface with regards to discovery and  human biology, if anything we’re just getting started. The most fascinating part to me regarding DNA is the ability of our own consciousness to effect it, in several different ways.

There are portions of are DNA that are labelled as ‘junk,’ or simply perceived as useless. In fact, a large portion of it is perceived that way, but that’s only because we haven’t figured out the biological function that it serves. This does not mean it serves no biological function, like the new discovery mentioned below.

With non material science emerging as the forefront of the next scientific revolution, along with other non-physical aspects of ourselves that are found within the literature of quantum physics and parapsychology as well as the relationship between consciousness and our physical material world. It’s interesting to think about the possibility of our DNA playing a non-physical role as well, and almost makes you feel as if it must.

At least that’s the way I feel.

Perhaps our DNA is inter-dimensional? Extraterrestrial? Perhaps there are dormant aspects within our DNA that allow us to access other realms? I could go on and on, but it’s certainly interesting to contemplate.

Now, a new DNA structure inside of humans has been identified, and it’s called the “i-motif.” It resembles a twisted “knot” of DNA, instead of the well-known double helix structure that was first described by Crick and Watson.

It’s the first time that it’s been observed in living cells, although scientists have long suspected its existence.

It’s an exciting discovery, but just as with so many others regarding our DNA, scientists aren’t really sure how to identify what biological function it serves, but it must serve some purpose. Just because we lack the ability to identify it, does not mean that it’s not significant.

“When most of us think of DNA, we think of the double helix…This new research reminds us that totally different DNA structures exist – and could well be important for our cells.”
– Professor Daniel Christ to the Independent, a molecular biologist at the Garvan Institute of Medical Research.

Garvan was the studies lead author, and Professor Marcel Dinger was the co-author. According to Dinger,

“The i-motiff is a four-stranded ‘knot’ of DNA…in the knot structure, C (cytosine) letters on the same strand of DNA bind to each other – so this is very different from a double helix.”

The findings of Professor Christ and his team were published in the scientific journal Nature Chemistry.

There was also an interesting discovery published online in the same journal that discovered four-stranded DNA within human cells. They referred to these structures as G-quadruplexes, because they form in regions of DNA that are full of guanine, one of the DNA molecule’s four building blocks. The others are adenine, cytosine and thymine. A hydrogen bond is responsible for holding the four guanines together. The four stranded DNA usually presents itself right before cell division.

The discovery was published online in Nature Chemistry, and you can take a look at it here. The study was led by Shankar Balasubramanian at the University of cambridge, UK.

For us, it strongly supports a new paradigm to be investigated – using these four-stranded structures as targets for personalized treatments in the future.We have found that by trapping the quadruplex DNA with synthetic molecules we can sequester and stabilise them, providing important insights into how we might grind cell division to a halt
— Shankar Balasubramanian

Maybe we could take this as a lesson and accept the fact that there are always new discoveries to be made about our biology, as well as the nature of our reality. For all we know, our DNA could be multidimensional in nature? It could be 12 stranded DNA? Maybe we have yet to discover it?  Maybe a majority of our DNA, and the biological functions it serves are largely undiscovered? Maybe some portions of our DNA have yet to be activated?

Bringing It Back To Consciousness

Below are the questions asked by Jim Al-Khalili, a British theoretical physicist, author and broadcaster. He is Professor of Theoretical Physics and Chair in the Public Engagement in Science at the University of Surrey

“How does a robin know to fly south? The answer might be weirder than you think: Quantum physics may be involved. Jim Al-Khalili rounds up the extremely new, extremely strange world of quantum biology, where something Einstein once called “spooky action at a distance” helps birds navigate, and quantum effects might explain the origin of life itself.”  – TED

It’s clear that our consciousness plays a role when it comes to shaping our biology, and this is even more clear by the demonstration of the placebo effect and the science that’s emerging regarding the mind-body connection.

If you are interested in learning more, here are some articles below. I believe it’s important to mention these, as we really have no idea who we are, where we come from, and what we are capable of. Our DNA is a huge mystery, and despite the fact that we’ve discovered so much about it, the large majority of discovery still remains to be seen. Perhaps there is information encoded within our DNA that paints a completely separate story apart from the two dominating theories, evolution and God.

Personally, I believe there is an undiscovered spiritual aspect to our DNA that connects to something we have yet to identify, and I believe it would also connect us to lifeforms that probably span through multiple universes as well as dimensions

This article is a reprint from:  www.collective-evolution.com