SCIENCE HAS FOUND “THE HOME” OF SPIRITUALITY IN THE BRAIN. 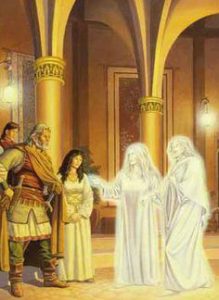 The picture above is an artist rendering of “The Shining Ones”, which there are references to in many old writings.

Scientists seek to quantify everything—even the ineffable. And so the human search for meaning recently took a physical turn as Columbia and Yale University researchers isolated the place in our brains that processes spiritual experiences.

In a new study, published in Cerebral Cortex (paywall) on May 29, neuroscientists explain how they generated “personally relevant” spiritual experiences in a diverse group of subjects and scanned their brains while these experiences were happening. The results indicate that there is a “neurobiological home” for spirituality. When we feel a sense of connection with something greater than the self—whether transcendence involves communion with God, nature, or humanity—a certain part of the brain appears to activate.

The study suggests that there is universal, cognitive basis for spirituality, as opposed to a cultural grounding for such states. This new discovery, researchers say, could help improve mental health treatment down the line.

Previous studies have examined the brain activity of Buddhist monks or Catholic nuns, say—people who are already spiritually inclined and familiar with the practice of cultivating transcendent states. But this research analyzed subjects from different backgrounds with varying degrees of religiosity, and totally different individual notions of what constitutes a spiritual experience.

“Although studies have linked specific brain measures to aspects of spirituality, none have sought to directly examine spiritual experiences, particularly when using a broader, modern definition of spirituality that may be independent of religiousness,” the study explains. Because there are many types of transcendent moments with varying degrees of meaning to different people, it’s been difficult to test the general effects of spirituality, as opposed to religiosity. So for this study, the researchers generated individual scripts that put each subject in their own relevant transcendent state.

With each of the 27 subjects—all healthy young adults—the researchers created a personal script based on each person’s self-reported previous spiritual experiences. The scientists then scanned brain activity when generating such a state in the subjects.

During their varied transcendent states, all subjects showed similar activity patterns in the parietal cortex, which processes sensation, spatial orientation, and language, and is thought to influence attention, among other functions. In other words, whether the thing that makes a person feel connected to something greater involves church, trees, or a stadium full of sports fans, it appears to have the same effect on the brain.

The effect on the brain is distinct from the effect of other forms of relaxation, according to researchers. “We observed in the spiritual condition, as compared with the neutral-relaxing condition, reduced activity in the left inferior parietal lobule (IPL), a result that suggests the IPL may contribute importantly to perceptual processing and self-other representations during spiritual experiences,” the study explains.

These changes in the brain may help explain why, during spiritual experiences, the barrier between the self and others can be reduced or even eliminated altogether. Although we need some separation between ourselves and everyone else for protection and to manage reality, removing the barrier every so often is also valuable.

“Spiritual experiences are robust states that may have profound impacts on people’s lives,” explains Yale psychiatry and neuroscience professor Marc Potenza, in a statement about the work. “Understanding the neural bases of spiritual experiences may help us better understand their roles in resilience and recovery from mental health and addictive disorders.”

Spiritual experiences involve “pronounced shifts in perception [that] buffer the effects of stress,” the study says. The findings suggest that those experiences can be accessed by everyone, and that transcendence isn’t dependent upon religiosity. That makes studying spiritual experiences and figuring out how to use such states for improved mental health easier for scientists. Next, the researchers hope to test a bigger group of subjects of all ages.

Beyond mental health, scientists study spirituality because the human quest for meaning is timeless and universal. By cultivating spiritual experiences in addition to strengthening our intellectual abilities, people can lead emotionally richer lives and develop more open minds, scientists say.

As Tony Jack, director of the Brain, Mind and Consciousness lab at Case Western Reserve University—who was not involved in this study—explains to WKSU, analytical thinking and spiritual, empathic thinking rely on different neural pathways and processes. They don’t happen simultaneously in the brain, but both modes are necessary, like breathing in and breathing out. “You can’t do both at the same time, but you need both to stay healthy and well,” he says.

Read next: Scientists studying psychoactive drugs accidentally proved the self is an illusion

MY COMMENT:  There may very well be activity in the Parietal Cortex when we induce Spiritual Experiences by ourselves.  Still, the Pituitary Gland is the major Gate to the Universal Consciousness and mostly through there is where the Universe communicate with us.

This article is a reprint from:  https://qz.com