WHAT ARE WE GOING TO DO WITH ALL THE PEOPLE ?  THE ELITE DRIVEN GLOBAL GOVERNMENT PROGRAM CALLED “AGENDA 21” CALLS FOR THE ELIMINATION OF 95% OF ALL THE PEOPLE ON EARTH BY THE YEAR 2030 (It is in their own writings).

After you read the article below, you will understand why they are trying to exterminate 6.5 Billion people by Chem Trails, Vaccinations with neuro-toxins and cancer causing agents in it, new man made viruses, wars and other methods.  Phoenix Arizona stand to lose 650,000 jobs to Automation, Indianapolis 338,000 and some areas in Europe could lose as much as a Million jobs to automation.  This includes even house keepers, maids and hotel workers.  People graduating from Law-school are already having a hard time finding jobs because of the Internet and “Noshowjo” at www.noshowjo.com – where people can take their disputes to get resolved without the regular court system – for free. 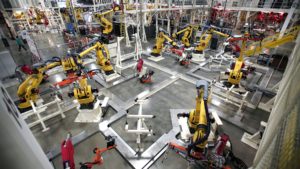 Congress and the Trump administration have yet to create a coherent policy response to a widely forecast social and economic tsunami resulting from automation, including the potential for decades of flat wages and joblessness. But cities and regions are starting to act on their own.

What’s happening: In Indianapolis, about 338,000 people are at high risk of automation taking their jobs, according to a new report. In Phoenix, the number is 650,000. In both cases, that’s 35% of the workforce. In northeastern Ohio, about 40,000 workers are at high risk.

In all three places, local officials are attempting to take charge by identifying jobs most at risk, skills most likely to be in great future demand, and how to organize education and industry around a new economy.

The background: The Phoenix and Indianapolis studies were carried out by ShiftLabs, a collaboration of Rockefeller and New America, a think tank. They are responding to forecasts of an utter shakeup of current jobs, forcing vast numbers of workers across fields to learn new skills, often unrelated to their occupation as currently configured.

By the numbers in Indianapolis and Phoenix:

Women are disproportionately affected in both cities:

In both cities, in line with prior studies, those with a high school degree or less are at greatest risk. They represent about 45% of those at high risk of automation and just 18% of those at low risk.

As for solutions, cities and regions are only starting to figure out what they can do.