THESE VOLCANIC ERUPTIONS ARE ONLY THE BEGINNING: 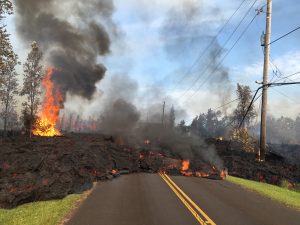 Lava from the Kilauea volcano smothered roads and burned down trees and houses in what was a tumultuous weekend for Hawaii’s Big Island.

As of this morning (May 7), a total of 10 volcanic fissures have opened, pouring lava onto the surrounding streets and forests, according to the Hawaii County Civil Defense. The red-hot rock has sparked fires — a total of 35 structures, most of them homes, have burned down since the eruption started on May 3, the Hawaii County Civil Defense reported.

Hawaiians also have to deal with volcanic air pollution known as “vog,” or hazy air pollution primarily caused by water vapor, carbon dioxide and sulfur dioxide, according to the U.S. Geological Survey (USGS) and its partners. As a result, government officials advised people with breathing problems to stay inside and, if needed, use air purifiers. [See New Photos of the Lava Erupting from Mount Kilauea]

Kilauea has always been an active volcano, but the latest lava show is one for the record books. It started in mid-March, when geologists noticed that Kilauea’s Pu’u ‘Ō’ō vent was inflating in size. Pu’u ‘Ō’ō has been erupting almost continuously since January 1983, but the inflation was out of the ordinary, Janet Babb, a geologist and Hawaiian Volcano Observatory spokesperson, told Live Science last week.

Soon, there was so much magma in the system that Pu’u ‘Ō’ō’s crater floor collapsed on April 30. The excess magma moved southeast of the vent to a vulnerable spot: Leilani Estates, a residential area filled with homes.

The lava’s wayward move proved disastrous for people living there. A series of earthquakes, including a magnitude-6.9 quake that struck May 4, were followed by spewing lava. As of today, lava and gas continue to erupt at low levels within Leilani Estates, according to the Hawaiian Volcano Observatory (HVO). Moreover, last night there was only minimal lava and spatter — that is, blobs of airborne lava — from the various fissures.

But this isn’t a sign that the eruption is winding down.

“This is likely only a pause in activity; additional outbreaks or a resumption of activity are anticipated as seismicity continues in the area,” the HVO said. For instance, aftershocks that are capable of producing rockfalls are expected, the HVO noted.

Meanwhile, Pu’u ‘Ō’ō doesn’t have any active lava, and the lava lake at Kilauea’s summit continues to drop.

But, given the relative downturn in geologic activity, Leilani Estates residents are allowed to check on their property during the day, so long as they are “prepared to evacuate at a moment’s notice,” the Hawaii County Civil Defense said.

Everyone else was advised to stay away.

“Please, the residents of Leilani need our help,” the Hawaii County Civil Defense said. “This is not the time for sightseeing. You can help tremendously by staying out of the area.”