THE STORY ON MY PET COUGAR / PUMA 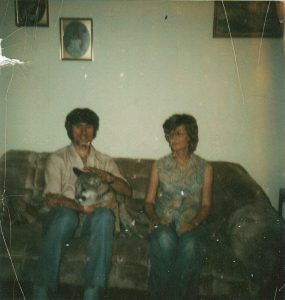 YES – 40 YEARS AGO I HAD A COUGAR / PUMA / NORTH AMERICAN MOUNTAIN LION FOR A HOUSE PET.

This was back “in the dark-ages” when I lived in Minneapolis and had the Flight School and Flight operation there.  One of the guys we were teaching how to fly, had a business called “Cougars Unlimited”.  He had several big cats of different kinds.  He took them to schools, libraries and places for lectures, fun for kids and the like.  One time him and I flew to Colorado Springs to pic up a Black Panther kitten he had bought.  On the way back he asked if I would like to have a cat like that, and I said “YESSSSSS” !!  At the time I was not thinking of them growing up – – .

A week or so later he brought me 2 Cougar kittens.  One had a bone mineral deficiency, and had broken a front leg from jumping of a couch, so it had a cast on one of its legs.  We nursed that one back to health in a few months, and he took it back.  The other one we kept for a lot longer.  The other one grew up and became a grown house-cat.  It was a lovable cat.  We had a good size house with three floors and the cat loved running up and down the stairs.  It loved playing with kids, never growled at anybody and never bit anybody.  I took the cat to the office at the airport some times, and the people there fell in love with the cat too (everybody – – except the dog who lived there).  On one incident I had the cat outside by our fueling station at the airport, the telephone rang, and I had to go and get it.  I tied the rope the cat was on to a pipe near the gas pumps and went in to take the phone – thinking I would be back in a couple of minutes.  I must have been on the phone for 20 minutes and forgot about the cat.  In a short while someone from another Flight school on the airport called and said: “Come down here and pick up your cat”.  The cat had gotten itself out of the rope and wondered off down the ramp on the airport.  Everybody on the airport knew I had the cat so they knew where to call.  I ran down the ramp and found the cat sitting next to a training-airplane being refueled, with the student refueling the airplane standing on top of the wing and not about to get down under any circumstance.  To me, it was funny, but I am sure it was not quite as funny for the young man standing on top of the airplane – and yes – it was a Cessna high wing airplane.

Another time I remember we put the cat in the back seat of the car and took it to the grocery store.  We left the cat in the car, and when we came out after shopping for food, there must have been 40 people standing around the car looking at the cat.  The cat seemed to enjoy it.  It was a lovable cat, but it was hard on furniture – curtains – houseplants -.  All this was before the “Police State” set in, so we had no permit to have the cat, because none was needed.  I am not so sure this could be done any more, because now you need a Permit by government to sneeze in public.  It is sure fun to think back on.