THERE IS MORE TO THIS HAND SHAKE THAN MEETS THE EYE !!! 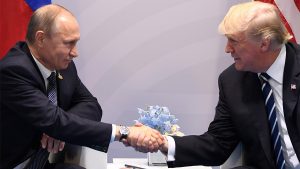 DO NOT BE AFRAID.  IF YOU ARE, YOU ARE BEING PLAID LIKE A FIDDLE.

There will not be any Nuclear war between Russia and the USA – – not in my Time Line.  Of that, there is an agreement at the highest level of Politics.  Putin and Trump talk on the telephone about every week.  They laugh and sound like good friends.  The telephone connection they use, is the Russian Satellite Telephone System.  It is the only one Trump trust.  All what you see, including the Gas Attack in Syria, is fake – False Flags to keep you scared and the money flowing in to the pockets of the people who think they are still in charge (the Secret Government – the Senior Executive Service “SES”).  So quit worrying and take care of yourself, your family, your community and – – move away from the coast.

The article below is a reprint from:  www.nexusnewsfeed.com

Putin & Trump will not allow armed confrontation between Russia, US – Lavrov

Vladimir Putin and Donald Trump will absolutely not allow armed confrontation between Russia and the US, Russian Foreign Minister Sergey Lavrov told RIA Novosti in an interview.

“Speaking about risks of a military confrontation, I am 100 percent sure that [both the US and Russian] militaries won’t allow this, and of course neither will President [Vladimir] Putin or President [Donald] Trump,” Lavrov said.

“After all they are leaders, elected by their people and are responsible for their peace,” the Russian foreign minister added.

Amid deteriorating relations between Moscow and Washington, Lavrov signaled that there are attempts to ease the knot. In particular, the foreign minister announced that the US president invited his Russian counterpart to Washington during a phone call. Trump said he would “be glad to see [Putin] in the White House” and then added that he “would be happy to make a reciprocal visit [to Moscow].”

During the interview, Lavrov also touched upon the US-led strikes on Syria last week. Trump, along with allies the UK and France, ordered the bombardment following an alleged chemical attack in Douma. It came just hours before experts from the Organisation for the Prohibition of Chemical Weapons (OPCW) were due to begin a fact-finding mission there.

After the US-led strikes, Russia no longer has any moral barriers on S-300 missile system deliveries to Syria, according to the Foreign Minister. Moscow promised not to send S-300s to Damascus around 10 years ago at the request of its partners, he said.

“We took into consideration their argument that this would destabilize the situation, despite the missile systems being a purely defensive system.”

“We heeded their calls. But now we have no such moral obligation,” Lavrov stated.

Syrian air defense systems intercepted 71 out of over 103 missiles launched at civilian and military targets, the Russian Defense Ministry said shortly after the airstrikes. Russian air defense units in Syria were not involved in repelling the attack.

Prior to the Western bombardment, Russia warned the US that crossing certain “red lines” in Syria would prompt retaliatory measures from Moscow, Lavrov stated. The foreign minister quoted Russian Chief of the General Staff Valery Gerasimov as saying that if any actions of the Western coalition affect Russian servicemen, Moscow will respond.

Russian military leadership and generals met their US counterparts, who were informed about Russia’s so-called “red lines,” including geographical “red lines” on the ground.

“Anyway… these ‘red lines’ were not crossed,” during the coalition’s campaign, he added.