UNDERGROUND BASE ON MARS 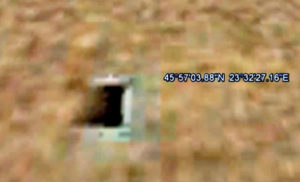 THIS ONE WILL BE HARD TO EXPLAIN AWAY.   AND NASA WILL DO AS USUAL – JUST “STONEWALL” AND SAY – NOTHING, HOPING IT WILL GO AWAY.  I REMEMBER FROM TRAVELING BEHIND THE “IRON CURTAIN” DECADES AGO, THEY USED TO SAY: “NOTHING IS CONFIRMED TO BE THE TRUTH BEFORE GOVERNMENT HAS DENIED IT”.

UFO hunters claim to have discovered a series of mysterious hidden alien structures on planet Mars. The structures, according to UFO and Mars anomaly hunters, appear to have been constructed by aliens wishing to conceal their presence from visitors to the planet.

However, some sources report that the mysterious structures were originally discovered by the prolific Mars anomaly hunter Marcelo Irazusta, who reported that he detected some of the structures despite efforts by NASA to conceal them using “crappy Photoshop.”

The images uploaded to YouTube by Andreda, who claims they are evidence of alien presence on Mars, have been viewed thousands of times by curious members of the UFO community. Many UFO enthusiasts appear convinced that they are authentic and reliable evidence of alien life on planet Mars.

“Rumors has it that most of Mars bases are inhabited… and curios people continue to find fact based evidence that leads to truth.”

“The point is that when you put them [NASA] in front of truth and evidence they adopt the silence strategy or they invent some crazy and hilarious explanations….very sad.”

“Andrew Basiago’s disclosure is being proved right! With every mars photo. He basically claims we already teleport to mars daily with secret teska tech… and have underground military bases there.”

Andreda’s YouTube video (see below) gives detailed directions about how you may find and examine the alleged structures and entrances to underground Mars bases on your own.

“Mysterious structures on Mars. Most are intentionally hidden,” the YouTube UFO hunter writes in the description of the video and supplies the Google coordinates.

Here are some of the most revealing things you will see:

But an alleged structure located at coordinates 45°57’03.88″N 23°32’27.16″E has attracted the special attention of the UFO community. According to UFO Sightings Daily’s Scott Waring, the photo shows a carefully concealed entrance to a massive underground base for alien UFO spaceships on Mars.

Although Dahboo77 claims that some of the structures appear to have aliens still occupying them, Waring believes it is likely that the underground structure below the entrance located in coordinates 45°57’03.88″N 23°32’27.16″E has been abandoned by the aliens who built and occupied it and that it could serve an ideal site for the first human settlement on Mars.

Waring argues that the site would be an effective habitat for the first human Mars settlers because it appears to have provided safe haven for alien builders who abandoned it only after their mission on Mars had ended.

“This is the location Earth should choose if they want to make a settlement on Mars,” Waring writes. “This is a location that has already been used and proven effective by aliens. It’s probably abandoned… just waiting for new owners.”

Dahboo777 expresses excitement about the discovery and castigates NASA for hiding the evidence of alien life on Mars. According to the UFO hunter, it would be impossible for NASA to pretend that a huge, gaping entrance on Mars to an underground base is in fact a rock formation or shadow.

The latest evidence is plain to see and unmistakable, Dahboo77 insists.

“Every time an amazing discovery is made on Mars, they quickly tell the sheep it is a rock or shadow! Time and time again. They try to make excuses for the objects being discovered all over Mars.”

The UFO hunter also criticizes skeptics who support NASA’s alleged sinister policy of hiding the truth about alien and UFO presence on Mars by inventing clever excuses to explain away the mass of photographic evidence of extraterrestrial life and intelligence on the planet.

“No doubt, some of the small minded out there will buy NASA’s lies until the Great Deception,” Dabhboo77 writes. “But for those out there with an open mind and know we are being lied to, this find speaks volumes!”

Dahboo77 describes the latest discovery as clinching evidence of alien life on Mars, at least in the past.

Much of this article is a re-print from www.inquisitr.com