DO THEY LOOK LIKE US ?  CHANCES ARE THEY ARE DIFFERENT.   LOOK AT THIS PICTURE OF A STATUTE AND MUMMIES FOUND IN THE RUINS OF OLD ANUNNAKI SETTLEMENTS DATING BACK 200,000 TO 300,000 YEARS IN SOUTHEASTERN AFRICA.  LOOK VERY CLOSELY AT THEIR FACES.  LOOK AT THE BOTTOM OF THIS PAGE TO WHAT THE ANUNNAKI AND THE “iGIGI” LOOKS LIKE.  READ BELOW, AND THE BOOK: “SPIRITUAL SCIENCE HIGHER CONSCIOUS THINKING AND HOW TO ACCESS THE UNIVERSAL CONSCIOUSNESS”, AND YOU WILL KNOW MORE ABOUT THE CREATION OF “MAN”, WHO WE ARE AND HOW THE UNIVERSE WORKS.

This article is a reprint from:  www.spiritscience.net – – written by Lara Starr. It is excellent research.  Visit their site.  There is great stuff there. 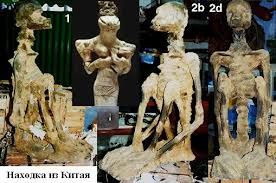 In 1849, British archeologist, Austin Henry Layard discovered 22,000 clay tablets in the Ancient Sumerian city of Nineveh, in an area now known as Iraq. The tablets contain cuneiform script and are one of the earliest known writing systems, created by the Sumerians 6,000 years ago.

In 1976, a man named Zecharia Sitchin published his personal translations of the Sumerian texts in a series of books called “The Earth Chronicles.“ According to Sitchin, the clay tablets describe an alien race known as the Anunnaki, who came to Earth to mine gold. Sitchin claimed extraterrestrial visited earth in the past because their home-planet needed gold to survive.. But that they also tampered with the genetics of humans when they came here.

There are many theories about the Anunnaki that could fill several volumes of books. Question is.. If the ancient Anunnaki really did exist, wouldn’t there be tangible evidence of their legacy on Earth?

Well, in 2005 a man named Johan Heine discovered an ancient city in Africa that could prove to be the missing link to the Anunnaki. Located around 150 km west of the port of Maputo, in South Africa, researchers have found the remains of a vast metropolis that measures, according to initial surveys, a staggering 1,500 square kilometers.

This ancient metropolis is, according to many, part of an even larger complex that encompasses an even greater area of 10,000 square kilometers, but the most fascinating detail about it is its age: It is believed to be between 160,000 and 200,000 years old! Curiously, near these ancient metropolises the presence of ancient gold mines indicates the presence of an advanced civilization that was able to extract gold, in 200,000 BC.

So the big question is, WHO could have been mining all that gold, such a long time ago?

If you look at Sitchin’s work, it may all start to make sense. Based on The Cosmic Code: The Sixth Book of The Earth Chronicles by Zecharia Sitchin, this is the real historical timeline of our planet:

Events Before the Deluge:

450,000 years ago,
On Nibiru, a distant member of our solar system, life faces slow extinction as the planet’s atmosphere erodes. Deposed by Anu, the ruler Alalu escapes in a spaceship and finds refuge on Earth. He discovers that Earth has gold that can be used to protect Nibiru’s atmosphere.

445,000
Led by Enki, a son of Anu, the Anunnaki land on Earth, establish Eridu -Earth Station I – for extracting gold from the waters of the Persian Gulf.

416,000
As gold production falters, Anu arrives on Earth with Enlil, the heir apparent. It is decided to obtain the vital gold by mining it in southern Africa. Drawing lots, Enlil wins command of Earth Mission; Enki is relegated to Africa. On departing Earth, Anu is challenged by Alalu’s grandson.

400,000
Seven functional settlements in southern Mesopotamia include a Spaceport (Sippar), Mission Control Center (Nippur), a metallurgical center (Shuruppak). The ores arrive by ships from Africa; the refined metal is sent aloft to orbiters manned by Igigi, then transferred to spaceships arriving periodically from Nibiru.

380,000
Gaining the support of the Igigi, Alalu’s grandson attempts to seize mastery over Earth. The Enlilites win the War of the Olden Gods.

300,000
The Anunnaki toiling in the gold mines mutiny. Enki and Ninhursag create Primitive Workers through genetic manipulation of Ape woman; they take over the manual chores of the Anunnaki. Enlil raids the mines, brings the Primitive Workers to the Edin in Mesopotamia. Given the ability to procreate, Homo Sapiens begins to multiply.

200,000
Life on Earth regresses during a new glacial period.

13,000
Realizing that the passage of Nibiru in Earth’s proximity will trigger an immense tidal wave, Enlil makes the Anunnaki swear to keep the impending calamity a secret from Mankind.

According to many people around the globe, the Anunnaki are most definitely the ultimate proof that there are missing links in the origins of the human species.

So, about 2 years ago, I personally traveled to South Africa to see some of these structures for myself. I was ASTOUNDED by the sheer magnitude and the amount of effort that went into building these structures. To be honest, I left with more unanswered questions than I arrived with.

Why insist on using only one type of stone when there are other options?

Why take the stones from so far away?

Why do the stones make strange ringing sounds when you tap on them, almost like they’re made of hollow metal?

Some of the walls were also believed to be over 3 meters high at one stage.

Why build them so large?

Why didn’t they have windows or entrances in so many them?

Why build them in such strange patterns?

Why build so many?

Regardless of who built them when they were built, or why,  they were truly astounding feat. Too bad nobody has actually done a proper archaeological dig to see if anything is buried inside or near the structures. We just don’t have the money nor the manpower. But, you can still go visit them! Just try not to knock down the stones by climbing all over the walls. Too many people have done that already.

As an added bonus, here are some exclusive, up close and personal photos of these structures I took while I was there investigating.
Here are some images of the ancient city from above. 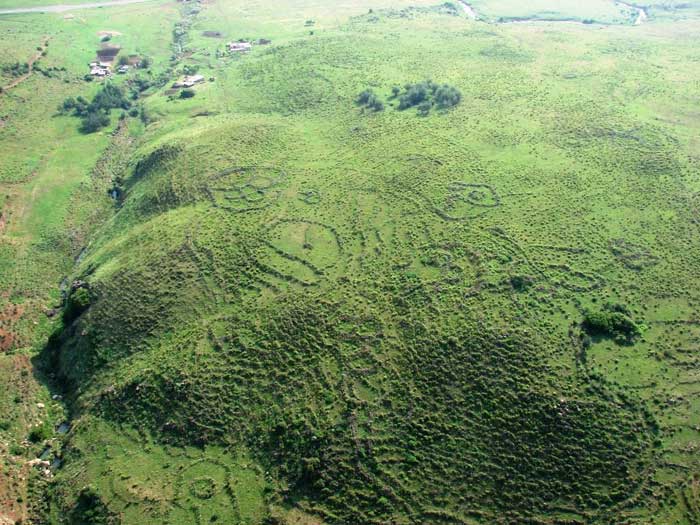 FROM WHAT I HAVE SEEN AND DISCOVERED, THE “PEOPLE” DEPICTED IN THE PICTURE AT THE TOP ARE THE “IGIGI”, BUT THEY ARE CLOSE WITH THE ANUNNAKI.  THE ANUNNAKI ARE THE 9 FOOT TALL HUMANS, WITH ELONGATED SKULLS, WHO CREATED A VERSION OF “MAN”.  REMEMBER, IT IS WRITTEN IN THE SUMERIAN TABLETS THAT THE ANUNNAKI CREATED A “SERVANT RACE” (SLAVE) IN THEIR OWN IMAGE AND LIKENESS.  IF YOU ARE LIKE ME, YOU WILL WANT TO KNOW MORE – – READ BELOW:

THIS IS WHAT IS IN IT:  CONCEPTS WRITTEN ABOUT IN THIS BOOK:   How the universe downloaded all its knowledge into my mind – How to design your life experience the way you want it to be, before you have to live it – until now, mostly undiscovered Universal Success Principles – Creation – What was created at the “Big Bang” – Who was “Jesus”, and what did he look like, according to the obscure Roman writings, and other non-biblical records? – Who / what is “God”? – – – Who really created the first Bible? – Who / what are you? – Who created you? – What is the Physical world made of? – What is Universal Consciousness? – How to use the right techniques to access the Universal Consciousness to manifest good things in your life – “Pearls of wisdom” and Success principles you can only learn by talking to Billionaires – How the Universal Consciousness speaks to you – What is the Universal Mind? – What is your “Mind”? – What is the “Power of the Mind” – How does the Subconscious Mind work? – Memory – Perfect recall of memory – How does the Super Conscious Mind work? – What is thought? – Is your life predetermined by Fate? – How does “Free Will” work for you? – What is Spiritual creation? – What is Physical creation? – Who are the “Guardians of the Soul”? – Quantum Physics explaining creation, made simple, without the equations – Can “God” be “good” and “evil” at the same time? – What really brings out “evil”? – Why do most prayers go unanswered? – How to pray – What is the language in the Spiritual world? – What is time? – Can we manipulate time? – Time travel is possible – Starting a new “Time line” – What is hidden in the future for mankind? – Telepathy – Thought Transference – Was the “Big Bang” 14 Billion years ago, an “accident”? – What is Love? – You can transfer Love to someone else – What is “Heaven”? – What is the “Great Sea of Light”? – What is the “Soul”? – Soul memory – Pre-birth memory – Where is our real “Home”? – Awakening – Illumination – Ascension – Immortality – What is Physical “death”? – Where is “Heaven”? – There is no Spiritual “death” – Reincarnation – KARMA – The importance of Forgiveness – Who was the “Teacher of Righteousness”? – The Essenes – How do you know when you are on the right Spiritual path? – The meaning of life – and more – much more.