WORKING FACTORIES WITH NO EMPLOYEES ARE COMING 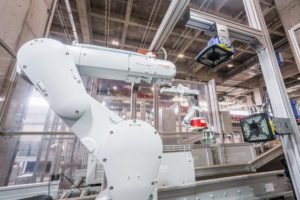 This is what Governments and Big business refuse to tell you.  Twenty years from now, or sooner, most the factory work will be done by Robots and total Automation.  This will include factory work, agriculture, automobile industry (except some repair work), retail stores, restaurants, and yes – even – prostitutes.  Bordellos with android sex workers will pop up.  But, there will be new industries and opportunities – on a small scale.  The top of the Jobs market will most likely be Computer technicians and in producing more Robots.  So what are the rest of the people going to do ?  It is becoming obvious we need a change in the way Governments and Industry are operating, and people are managing themselves.

When you read the short article below, you will understand that what is happening in China now, will come to a neighborhood near you SOON !

JD.com, one of China’s big e-commerce companies, has unveiled a warehouse in Shanghai that, it says, only keeps humans on board so they can service all the robots.

Wage hikes: The rising cost of labor has triggered a race to automate many areas of industry in China. That has translated into ambitious investment and research in robotics, and it is likely to figure in China’s grand artificial-intelligence push as well.

Automation angst: The news conjures images of rapid automation and job displacement. But it’s important to note that the process of filling retail orders on  a large scale is already heavily automated. Step inside one of Amazon’s fulfillment centers, for instance, and you’ll see robots moving around shelves of goods, as well as automated systems routing and tracking products and packages by the million.

Pick that up: While many fulfillment tasks are easily automatable and scalable, some, like picking and packing items, are more difficult to automate. As a video released by JD.com shows, the company is trying to tackle some challenging stuff, like packing products, using specialized machinery. It also apparently uses an AI vision system to inspect packages as they are processed.

This article was found and reprinted from:  www.nexusnewsfeed.com