YES – THERE WERE ADVANCED CIVILIZATIONS THOUSANDS OF YEARS AGO 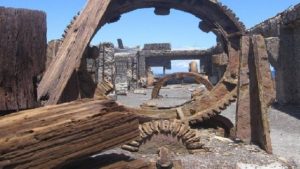 When a person decides to take chances, nothing can stop him. The archaeologist David Hatcher Childress decided to go on a journey only to discover the most beautiful spots on earth that serve as proof for the miracles of an ancient civilization.

The first civilization appeared 78,000 years on the enormous continent common as Mu or Lemuria. They existed for around 52,000 years when allegedly they were extinct by earthquakes caused by pole switch.

Even though the Lemurians were not as advanced as other ancient civilizations, they still have their impact in the field of technology. Especially, they were famous in the enduring megalithic buildings.

However, it was said that their biggest accomplishment was the science of government. The Lemurians most likely had one language and one government. The education was their key to success and every child had it as a mandatory duty until 21 in order to become acceptable to attend citizenship school.

People believe that when the continent of Mu sank, the oceans lowered intensely since the water went into the newly formed Pacific Basin. Thus, new lands appeared and joined the Poseid Archipelago of the Atlantic Ocean to form a relatively small continent. This small continent was named Atlantis in the present day, although, it’s real name was Poseid.

Atlantis had an ancient civilization that took very advanced steps in the technology. The books A Dweller on Two Planets, first delivered in 1884 by Phylos the Thibetan and its sequel in 1940 called An Earth Dweller Returns, talk a lot about the creations of Atlantis. The creations involve air conditioners to defeat deadly mist, airless cylinder lamps, electric rifles, mono-rail transportation etc.

With the books of India’s Rama Empire being well-kept, it is possible to study this ancient civilization’s history.

For a long time, the dominant opinion was that the Indian civilization was not older than 500 BC. However, in the past century, explorers found the sophisticated cities of Mohenjo Daro and Harappa in the Indus Valley of present Pakistan.

These amazing discoveries forced the experts to reverse the origin dates of Indian civilization thousands of years back.

The archaeologists described the ancient cities are highly advanced with an exquisite city planning. What made it even more significant was that the city’s plumbing-sewage system was better than the one they found in Pakistan and India today.

Ancient Civilization of Osirian in the Mediterranean

In the distant past, The Mediterranean was an example of a big and lush land. The ancient civilization that pre-dated dynastic Egypt was famous as the Osirian Civilization. The Nile River that came out of Africa was called the River Stix. Nevertheless, instead of streaming into the Mediterranean Sea, it carried on into the land and then turned west to flow in the deepest part of the Mediterranean Valley. There, it formed a big lake and flowed out between Malta and Sicily.

When Atlantis was demolished by a disastrous catastrophe it resulted in a flood of the Mediterranean Basin that eventually destroyed the Osirian’s cities and forcing them to go on a higher ground.

This ancient civilization constructed gigantic megalithic structures resistant to earthquakes and also had electric power during the time of Atlantis. They had incredible ways of transport that worked on electrical base.

The best discovery of the advanced technology of the Osirians is the platform found at Ba’albek, Lebanon. This platform involves large hewn rocks. Some of them are even 82 feet long and 15 feet thick.

The famous Mayan pyramids can be seen from Central America to the Indonesian island of Java.

The amazing pyramid called Sukuh near central Java is one of the most beautiful temples with stone stelae. The pyramid is nearly the same with the pyramids found at the ancient Mayan site at Uaxactun, near Tikal.

The Mayans were an ancient civilization famous for being very intelligent in the field of astronomy and mathematics. They also constructed canals and hydroponic garden cities in the ancient Yutacan Peninsula.

Edgar Cayce mentions the Mayas in one of his readings: “As for a description of the manner of construction of the stone: we find it was a large cylindrical glass (as would be termed today); cut with facets in such manner that the capstone on top of it made for centralizing the power or force that concentrated between the end of the cylinder and the capstone itself. And (secondly) in the temple records that were in Egypt, where the entity acted later in cooperation with others towards preserving the records that came from the land where these had been kept. Also (thirdly) in records that were carried to what is now Yucatan, in America, where these stones (which they know so little about) are now, during the last few months, being uncovered.”

This is a basic reprint from www.notfromearth.co